This episode topic: Rehab on a Budget. It’s been 4 years since we last spoke. We got to catch up on stuff. A Big thank you to the Shari Carlson Studio for the use of the studio to record this episode. Follow Joe on Instagram @standupjoe Intro Music Mick Schafer Band - Tears of Joy www.veecomedy.com @porasspodcast - Instagram & Twitter @veronicaporras - Twitter @veeporras - Instagram Venmo: @BMERecovery For a personal video message from me get me on Cameo! - search Veronica Porras --- This episode is sponsored by · Anchor: The easiest way to make a podcast. https://anchor.fm/app --- Send in a voice message: https://anchor.fm/porasspodcast/message Support this podcast: https://anchor.fm/porasspodcast/support 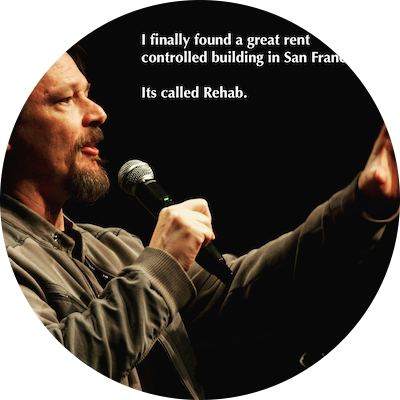 Joe is a square peg in a round hole sort of guy. He was raised a midwesterner, so he has manners, but he has been living in San Francisco for 20 years, so he thinks he’s better than you. Joe does two things GREAT! He tells stories and he talks to the crowd. Asked how he got into comedy his response was: ” I’ve been a comedian for 20 years now. It was a complete accident that I got into stand-up. A girlfriend had cheated on me. I was devastated. When I was encouraged to talk about my feelings people laughed. I was working at a restaurant and a waiter there was doing stand-up. He suggested I go to an open mic night – I did. Got laughs when I talked about my heartbreak and the rest is history.” Asked if he finds inspiration in other comics, he says,”These days it’s about blazing my own trail rather than emulating those who came before me. It’s weird to say that out loud because it could be confused with arrogance but I feel like after 20 years I’m not looking at other comics for inspiration anymore. I am trying to break into that next creative level and that doesn’t come by looking at others. It comes with looking inside.”

During the Covid-19 pandemic, two friends in comedy, Nina G. & OJ Patterson, joined forces to celebrate both their love of stand-…

"This is a really cool club to be a part of" Following the recent Texas SB8 near ban abortion law, I was inspired to do an episod…

"There's no point in trying to argue with someone who's set on being stupid" Cory Robinson is a comedian , actor, and podcaster (…