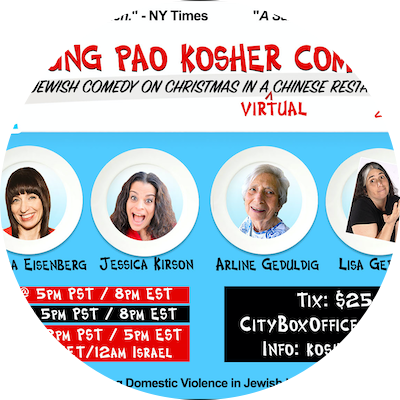 Lisa Geduldig is a San Francisco-based comedian and the creator, producer, and MC of Kung Pao Kosher Comedy™ — Jewish comedy on Christmas in a Chinese Restaurant, which celebrates its 29th year this December (albeit in Cyberspace). Lisa appeared in a Canadian documentary, Dreaming of a Jewish Christmas, which aired on Canadian and European TV in December 2017. Before the pandemic, Lisa had been running Comedy Returns to El Rio, a monthly decade-long comedy show at El Rio in San Francisco where her comedy career began 30+ years ago. Since July 2020, she has been producing Lockdown Comedy every 3rd Thursday of the month on Zoom from her mother’s retirement community home in Florida, where she accidentally got marooned for 17 months during the pandemic (and became a fan of the Early Bird special). Lisa also has been instrumental in helping thousands of people in Florida and visitors from Latin America get vaccinated against Covid-19 through two South Florida Covid vaccine Facebook pages that she helps moderate, Being bilingual (Spanish/English), she has helped countless travelers in their native tongue through the Spanish language Facebook page she co-founded. SF Comedian’s Side Hustle: Helping People Get Vaccines in Florida Lisa is also a freelance arts publicist in both English and Spanish. www.SFPublicist.com

“What are Jews supposed to do on Christmas?” Kung Pao Kosher Comedy is an institution in San Francisco and one of the city’s longest running comedy shows. Kung Pao is the brainchild of San Francisco-based Jewish comedian, Lis...